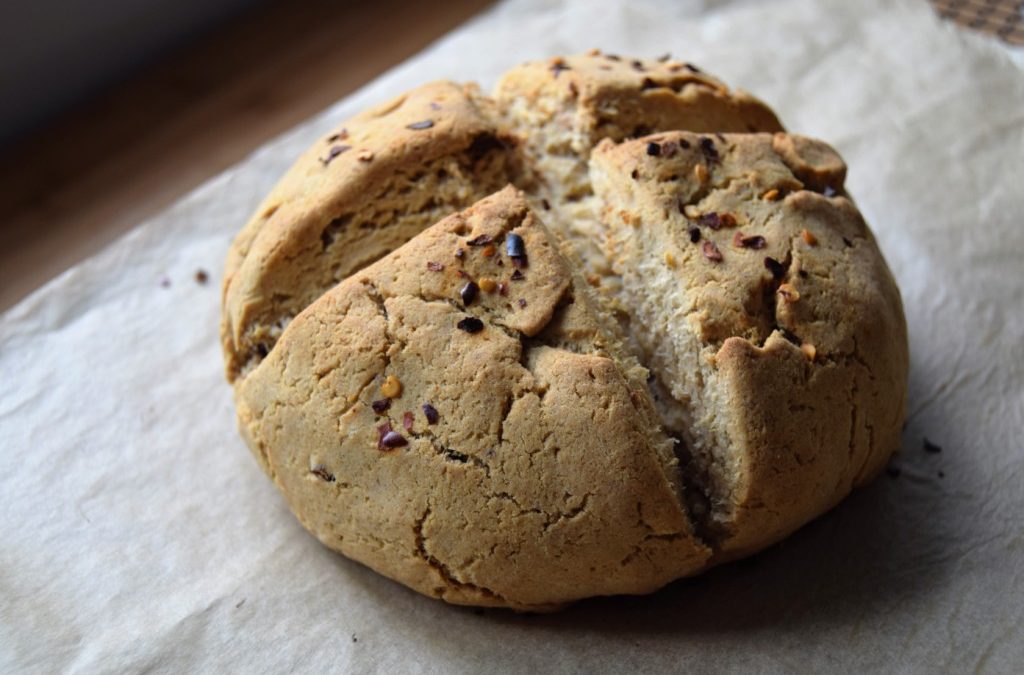 The smell of freshly baked damper emerging from the coals of a dying barbecue fire is one that should strike up a smile on anyone’s face. Damper is something that brings back fond memories of Aussie bush barbecues when I was growing up in Western Australia.

For the uninitiated, or un-Australian, damper resembles soda bread. The idea is that it’s something very easy to mix together and cook over a camp fire. The ingredients are basic: self-raising flour, butter, salt and water. Sadly because of bushfire risks it’s probably not quite as common for Aussie kids to experience cooking it in the wild these days – though I guess you could give it a go in the dying embers of a home barbecue if you use coals. It was always a treat when we got to make damper. We’d have to would wait for the coals to die down and put the sticky floury mix into some tin foil to cook. I think we normally did it in our billycan (another Aussie standby), but you could also do it straight into the coals, similar to foil-wrapped jacket potatoes. Even in the heat of summer, hot doughy damper was delicious.

The standard damper recipe is pretty plain, so you can go as wild as you want with additional flavours. I’m still playing around with the pack of native Australian spices I brought back from my trip home a few months’ ago, so for my latest recipe I added bush tomatoes. I also wanted to make my version gluten free as I really like the texture of rice flour – and it’s a helpful alternative if you can’t eat wheat.

Bush tomatoes are native to central desert areas of Australia. Early in the growth, the fruit is not that dissimilar to regular tomatoes. However the plants themselves are shrubby and not very tall. The other big difference is that the fruit isn’t considered ripe until it’s shrivelled and dried on the bush. That’s when they are ready to pick.

The taste of bush tomato is like a smoky sundried tomato. It’s pretty strong so a little will go a long way. You can grind the tomato into a powder and use it like any other spice. Alternatively, you can soak the dried tomatoes to plump them up and chop. I soaked mine in olive oil, but hot water will also work. Keep hold of the liquid as it has a lovely smoked flavour which you can use in other dishes (couscous or quinoa taste delicious with this added). Unless you’ve got an open fire in your back garden (which most of us don’t), you won’t quite be able to replicate the true coal-fired damper at home. The good news is that you can still recreate a very tasty version in your oven. It’s also a nice quick bread if you need to whip something up quickly, as isn’t doesn’t need to rise.

Damper is best eaten fresh on the day of making, ideally slathered with lots of good butter. It’s quite filling, so unless you have lots of visitors or a hungry family, you might not eat it all in one go. I cut my loaf into quarters and put the leftover pieces in the freezer. It’s very tasty defrosted and toasted, and scattered with a generous handful of grated mature cheddar. 1. Pop the bush tomatoes in a small bowl with the olive oil and hot water to soften them for 15-20 minutes. Once soaked, remove the tomatoes (but keep hold of the oil and water as you’ll need them). Chop the tomatoes finely.

2. In a large bowl, sift together the rice flour, cornflour, baking soda, baking powder and salt. Stir, then add the psyllium husk and mix again.

3. Add the egg, remaining water, milk and honey to your bowl of olive oil and water. Whisk everything together.

4. Make a well in the flour, and add the liquid and chopped tomatoes. Mix everything together until it’s well combined. The dough should be soft and hold together in a ball. Add a splash of water or milk if it’s still a bit dry. Drizzle a little more oil over your dough ball and cover the bowl with cling film. Leave to rest for 20 minutes. Preheat the oven to 200ºC (180ºC fan oven) and line a baking tray with parchment.

5. Gently roll the dough out of the bowl and put it on the prepared baking tray. Slash a deep cross in the dough and sprinkle over your chilli flakes. Put the tray into the oven for 20-25 minutes. It should open up where you’ve cut the cross and be golden on top.

6. Take the damper out of the oven and leave on the tray for 5-10 minutes (it will still be cooking slightly). Put the loaf on a wire rack, but make sure you eat at least once piece while it’s still warm from the oven. Serve it covered in butter, or maybe with thinly sliced tomato and goat’s cheese. It’s also great to dip in soup.

– If you can’t get hold of bush tomatoes, substitute a few tablespoons of chopped sundried tomatoes

– For an extra Aussie touch, use macadamia oil instead of olive oil

– Use maple syrup instead of honey

– Lightly toast 25g of linseeds and mix into the dry ingredients

What would you put on top of your damper? I’d love to hear. Anzac Biscuits – with a hint of cardamom

How to bake with gluten free flour