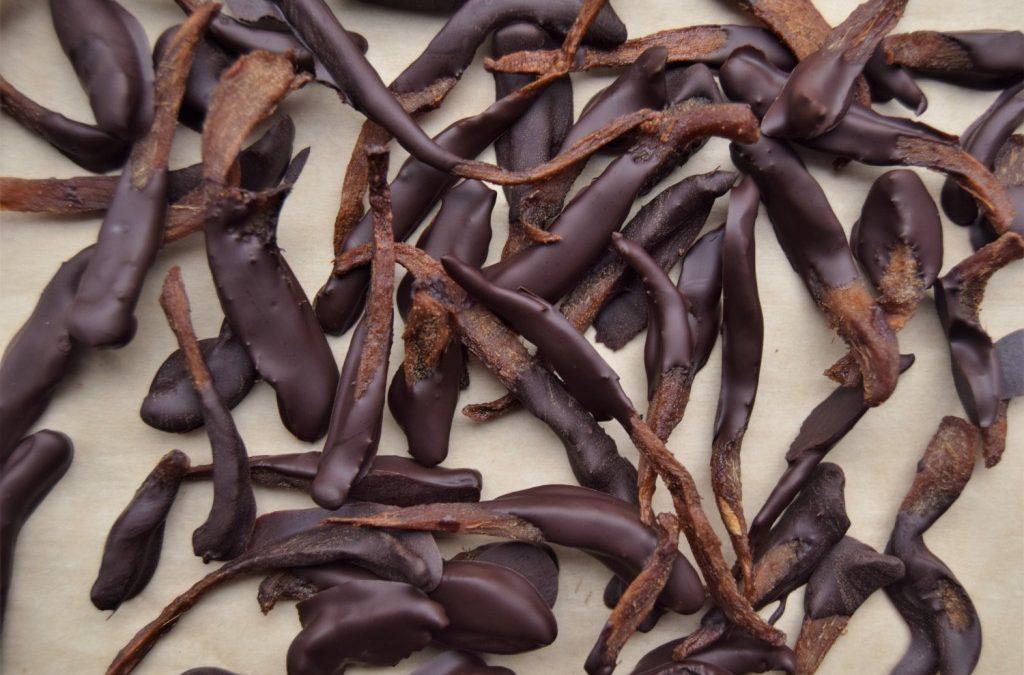 I really can’t get enough ginger! It’s one of the ingredients that’s a safe bet when my stomach is feeling a bit dodgy.

This recipe is a slightly different take on the juicy chunks of crystallised ginger that you’ll find in jars. Instead I’ve created slightly crispy, slightly chewy sticks of ginger dipped in dark chocolate which are a perfect mid-morning or afternoon snack.

Although there are a few steps and stages, don’t let this put you off as there are a fair few long gaps between the major steps as you just let the ginger just do its thing. These are a very nice treat to make over a chilled out afternoon at home on the weekend as you’ll then have some gingery mouthfuls for dessert. 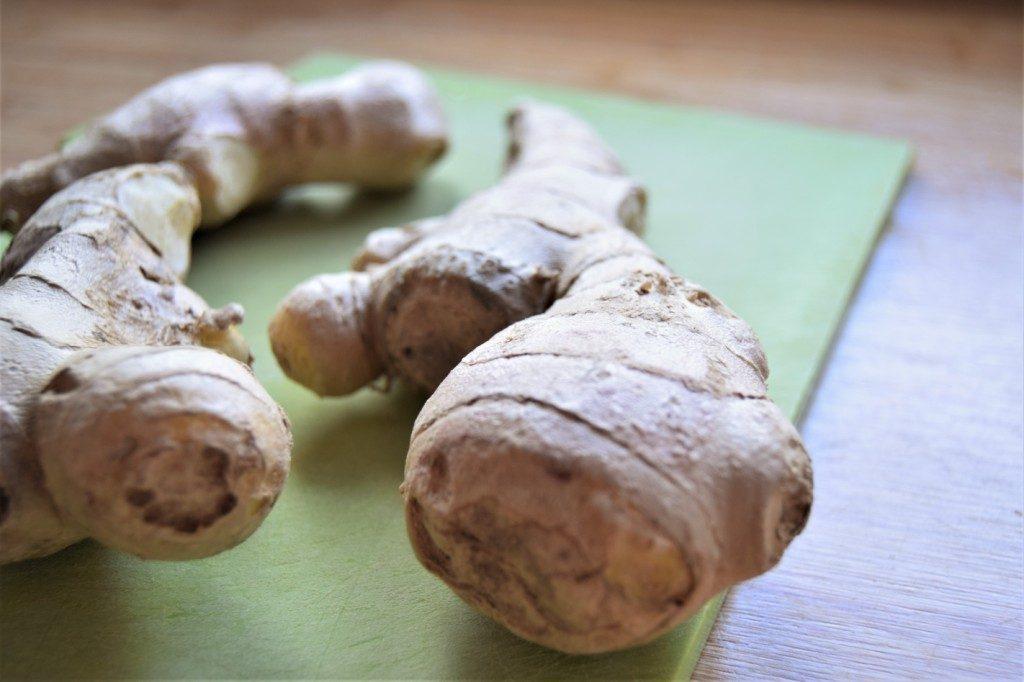 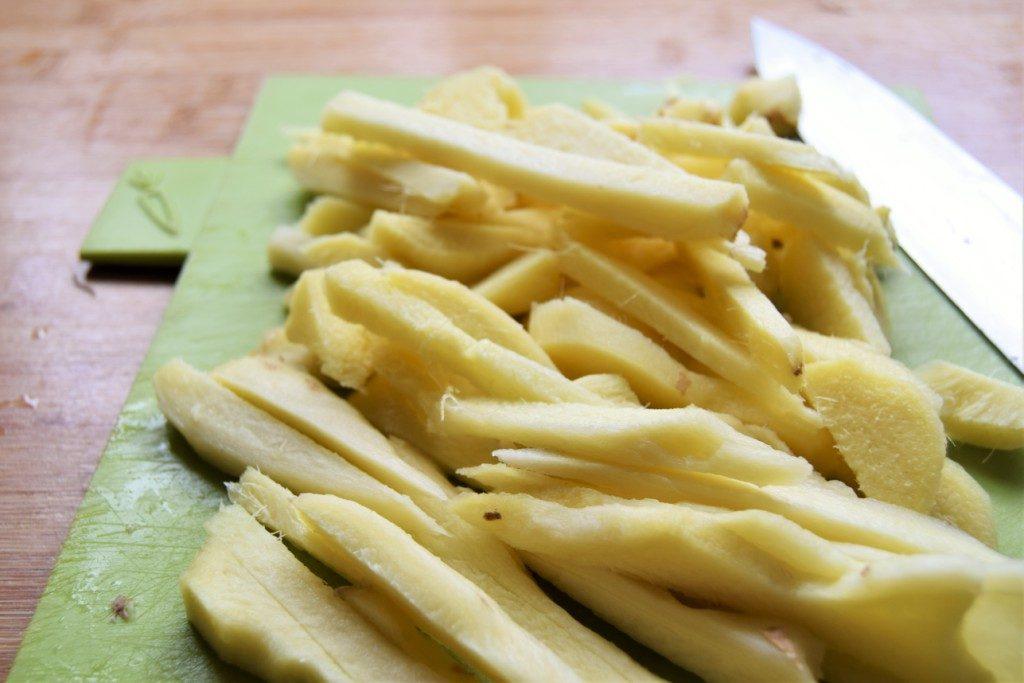 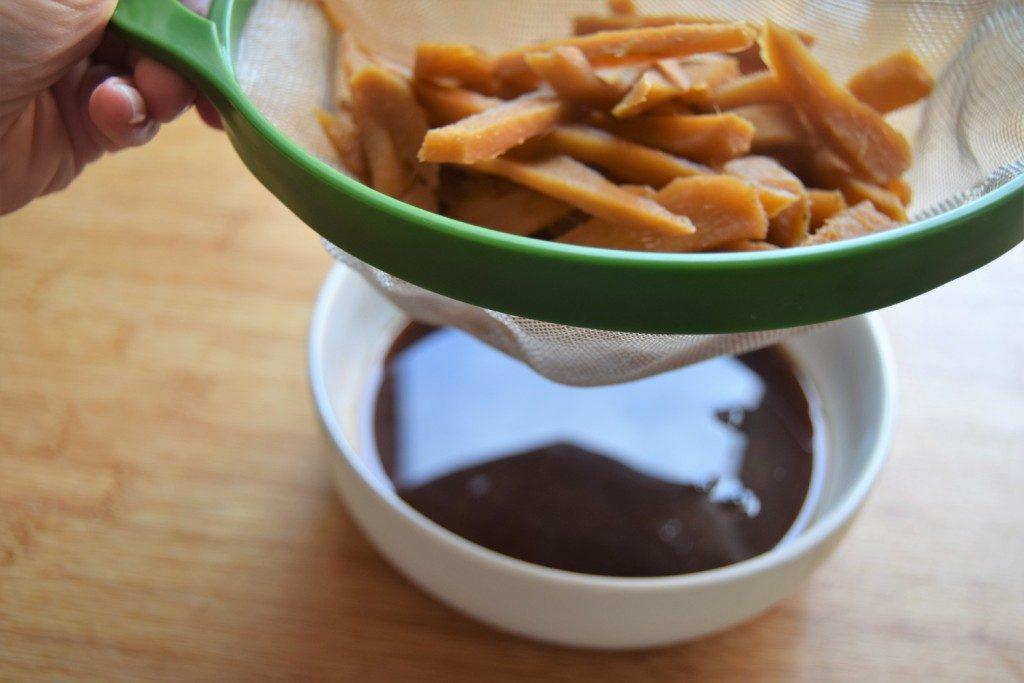 Of course, use the best dark chocolate you can find for the dipping.

If you’re in the UK, Willie’s Cacao is a good option and I suggest going for one of the Chef’s Drops containers, which you can get in the supermarket. I used Pump Street Chocolate 85% cocoa Ecuador for mine, which has a depth and richness that’s a lovely match for the sweetness and spiciness of the crystallised ginger. 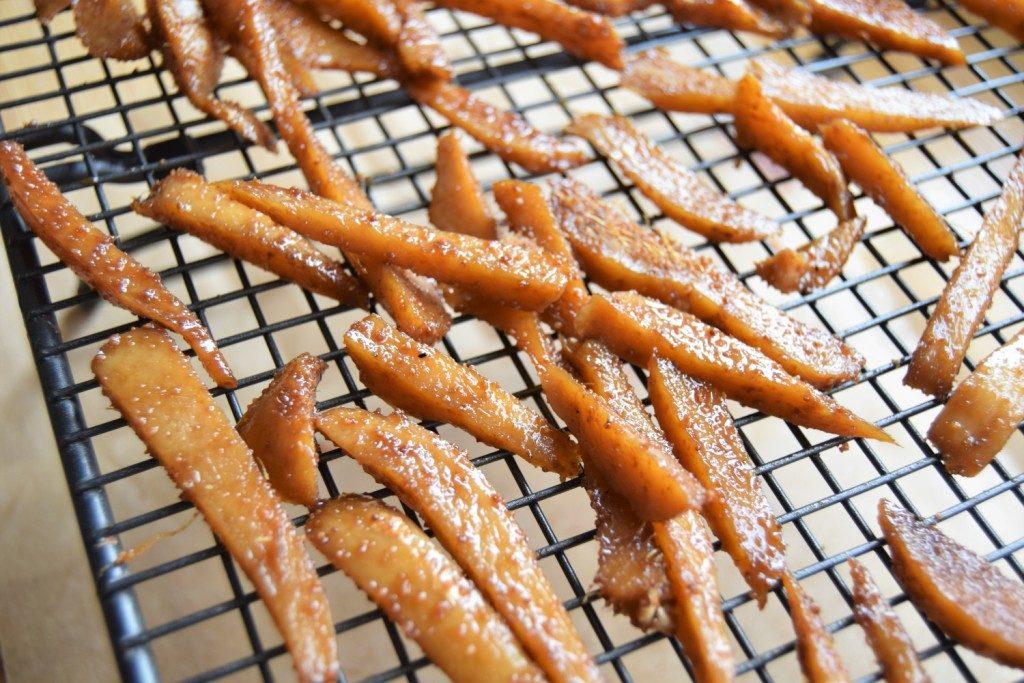 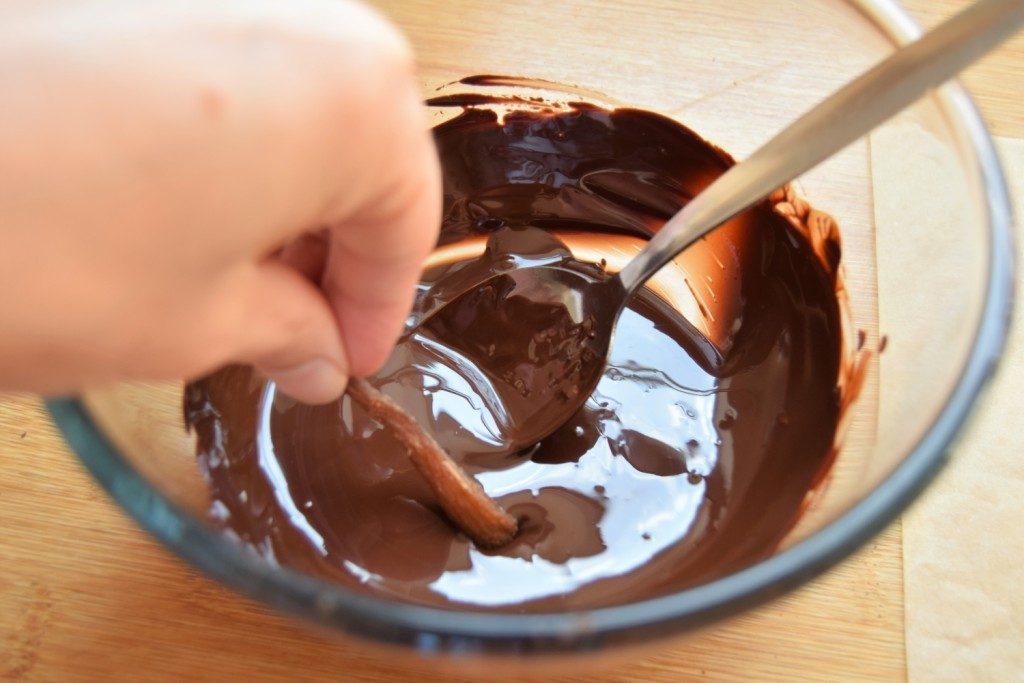 Warning: this way of making ginger is a little fiery! There’s definitely a kick to these little sticks, so maybe just nibble one or two if you don’t tend to eat spicy food. 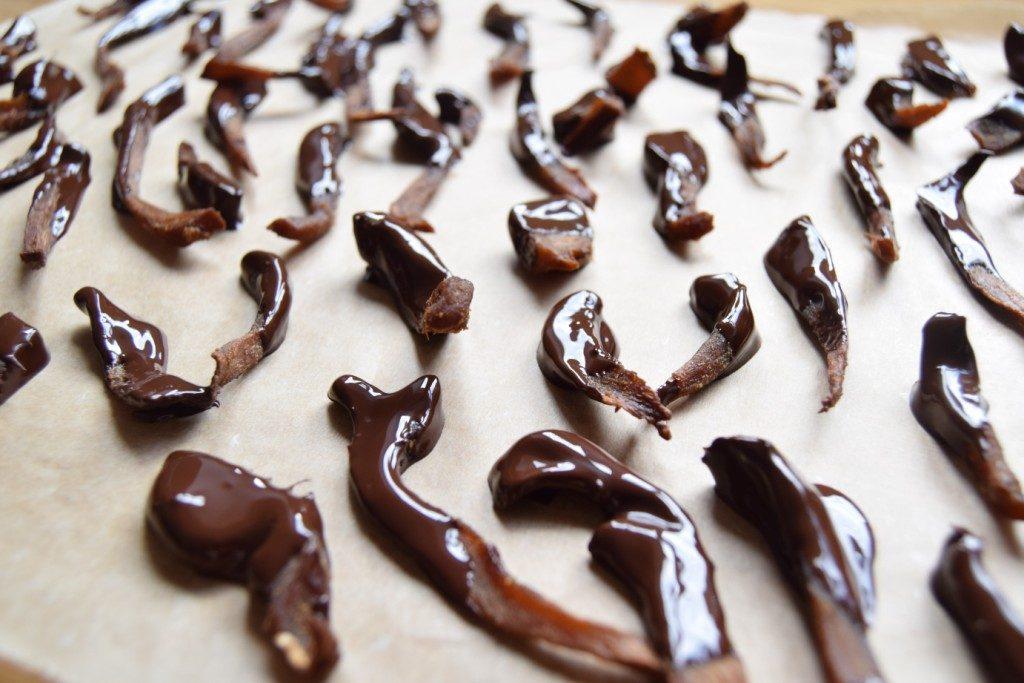 25g honey (use maple syrup for a vegan option)

1. Peel the ginger (see tip below) and cut into matchstick strips about 1/2 cm thick.

TIP: to peel the ginger, use a teaspoon to remove the skin. Gently drag the edge of the teaspoon along the surface of the ginger and the skin should lift off.

2. Put the sugar, honey and water into a small saucepan, mix well and bring to a gentle simmer on a hob. Carefully add the ginger strips (watch out for splashes!) and stir into the water mix so that the ginger is fully covered.

3. Half cover the pan with lid and bring the mixture back to a gentle simmer and cook for 50-60 minutes so that the ginger has softened. Stir the ginger every now and then, and if the simmering gets a bit too bubbly turn down the heat.

4. Take the ginger off the heat and pour the mix through a sieve over a bowl so you can cool and keep the lovely gingery liquid for pouring over pancakes, ice cream or porridge (you can bring it back to the boil to thicken a little). Place the ginger in a single layer on a baking rack with a piece of baking parchment underneath to catch any drips. Leave for 1 hour to dry a little.

5. Sprinkle 20g of the additional coconut sugar over the baking parchment under the rack and then drop the ginger pieces on top, and turn them well so that they are coated in it. Place the pieces back on the rack and leave for another hour.

6. Preheat your oven to 160°C/140°C fan. Place the baking parchment on a baking tray and lay out the ginger in a single layer. Pop in the oven for 25 minutes, give the tray a gentle shake half way through to turn the ginger. Remove the tray from the oven, sprinkle over the remaining 5g of coconut sugar and put the ginger back on the baking rack to cool.

7. Once the ginger is cool, gently melt the dark chocolate.

To do this, use a small heatproof bowl and small saucepan. Make sure the bowl fits over the saucepan and doesn’t touch the bottom. Boil water in your kettle and pour a few centimetres worth into your saucepan (the saucepan isn’t on the hob so pop a heatproof tray underneath it).

Put the chopped chocolate in the bowl and place it over the saucepan. Leave the chocolate until it has melted around the edges and then stir gently until all the chocolate is shiny and melted. It should take a few minutes as the chocolate gradually melts. If the chocolate doesn’t completely melt, pop the saucepan on the hob to heat the water a little and pop the bowl briefly back over it again.

(If you know how to temper chocolate, definitely do this as it will give you a nice shiny coating.)

8. Lay a piece of baking parchment over a tray. Using your fingers, and working fairly quickly, dip half of each ginger stick in the dark chocolate. Knock each piece against the side of the bowl a few times to shake off any excess chocolate, before placing it on the baking parchment. Once all the pieces have been dipped, pop the tray in the fridge for 15 minutes.

If you have any chocolate left in the bowl, pour this onto another piece of baking parchment and stick this in the fridge too. Keep it to chop up for choc chip cookies or to melt into brownies.

9. Once the chocolate has set, remove the crystallised ginger sticks from the tray and pop them in a sealed container (use the baking parchment from the tray to line it). Keep the sticks in a cool, dry cupboard.

These little ginger mouthfuls should keep for a couple of months – if you don’t eat them before then that is!