All I want for Christmas: Pumpkin Cinnamon Rolls 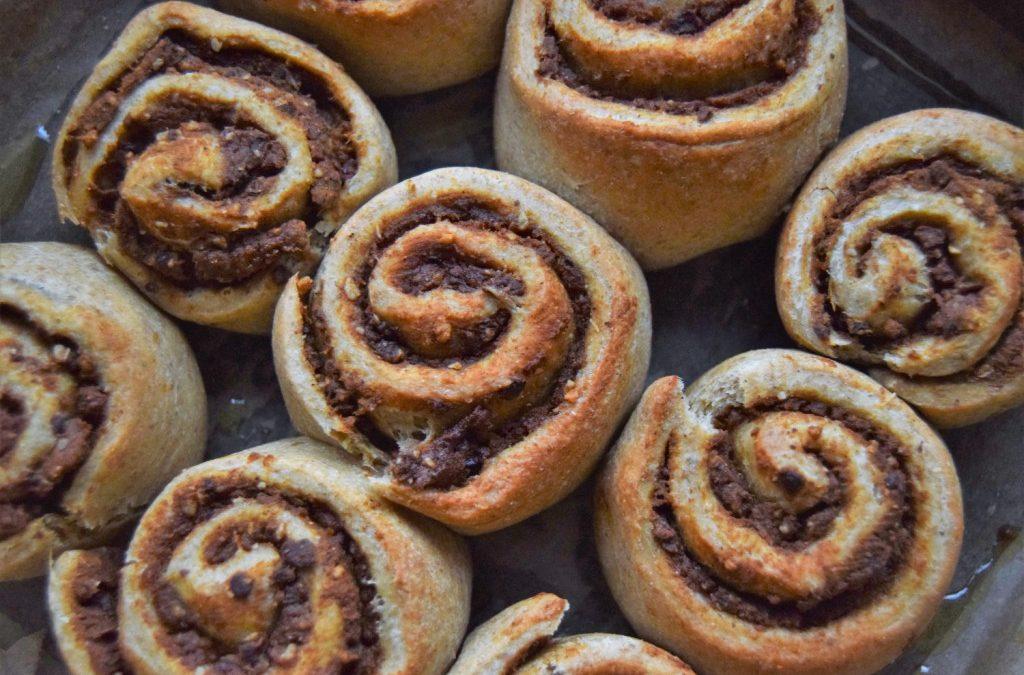 Baking is one of my favourite forms of therapy. And Christmas baking? Well that just takes things to a whole new level. When it’s frosty outside (like it has been) and I’m feeling like I need a bit of comfort (which I have been), then it’s to the kitchen I turn. Which is just what I did over the weekend when I baked up a batch of suitably Christmassy pumpkin cinnamon rolls.

This time of year is full to the brim with some of my favourite aromatics: cinnamon, cardamom, ginger, nutmeg. Baking warms all these smells up into a heady festive mix and I love it when they permeate my home from top to bottom as spices waft from the oven.

This time of the year can be a bit hectic; baking is a fantastic way to escape the craziness and cultivate a little Christmas calm. It’s a time to just be, in the kitchen, with focus and quietness. If you have children you could also share the experience with them and add a few of your favourite, more chilled, Christmas carols. Sprinkle in the smell of cinnamon and fresh bread baking, and I think that’s just a perfect recipe for a little happiness.

I’ll be honest, the starting point for this recipe was wanting to do a bit of kneading as I find it really relaxes me. I really enjoy making dough, though I don’t always make time to do it as much as I’d like to. I also wanted to see what I could put together with some half bags of flour and a few other ingredients hanging around my cupboard and fridge. All while feeling like I was creating something with a touch of Christmas about it. 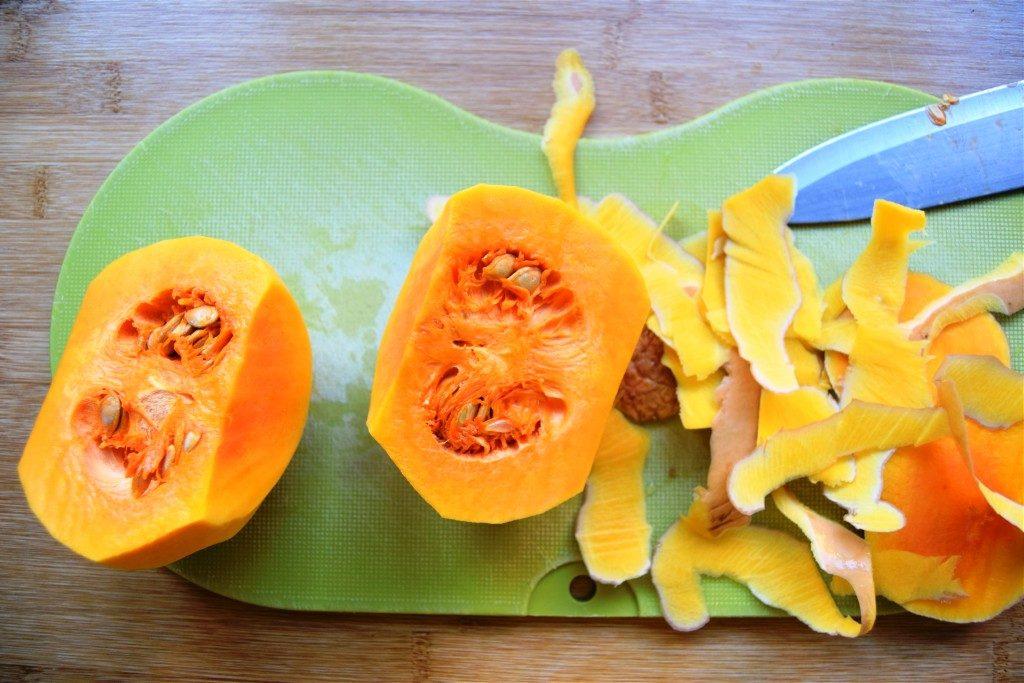 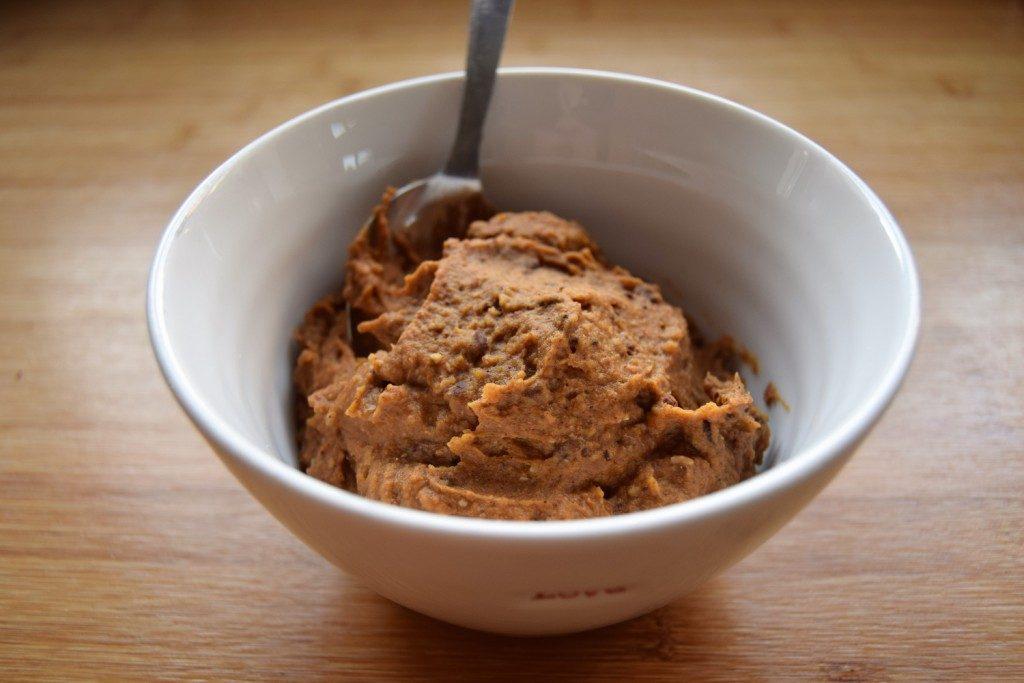 These pumpkin cinnamon rolls are a mix of spelt and rye flour, so they won’t be quite as light and fluffy compared to making them with strong bread flour. However I really like the texture and chewiness of spelt and rye – but you could swap these flours for bread flour if you prefer (or if that’s what you have in your cupboard). I’d still suggest using a bit of rye flour if you do as it adds richness and bite.

Although I called these pumpkin cinnamon rolls, the pumpkin filling is really butternut squash. As butternut squash has a natural sweetness it works really well in baking, but you could use pumpkin or sweet potato too. The filling is also kind of delicious on its own; if you don’t want to make the full recipe, the pureed squash with the crushed nibs, seeds, maple syrup and cinnamon is very tasty eaten straight out of a bowl, or mixed through porridge or spread on Christmas morning brioche.

Have fun getting creative with the recipe and which Christmas flavours you’d like to add. I’d love to hear what you try! 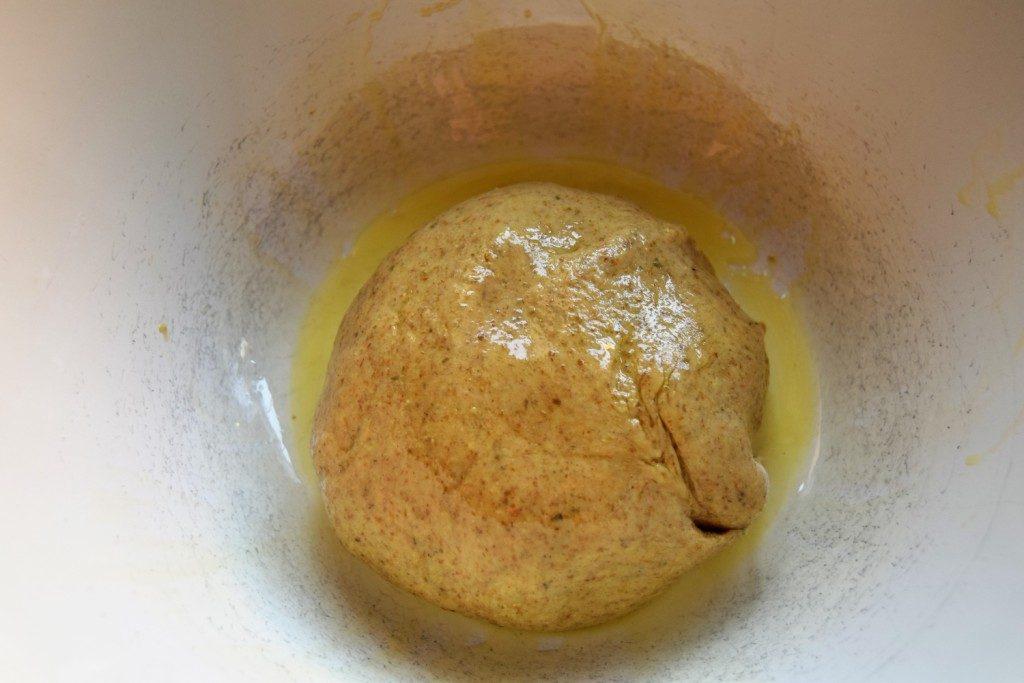 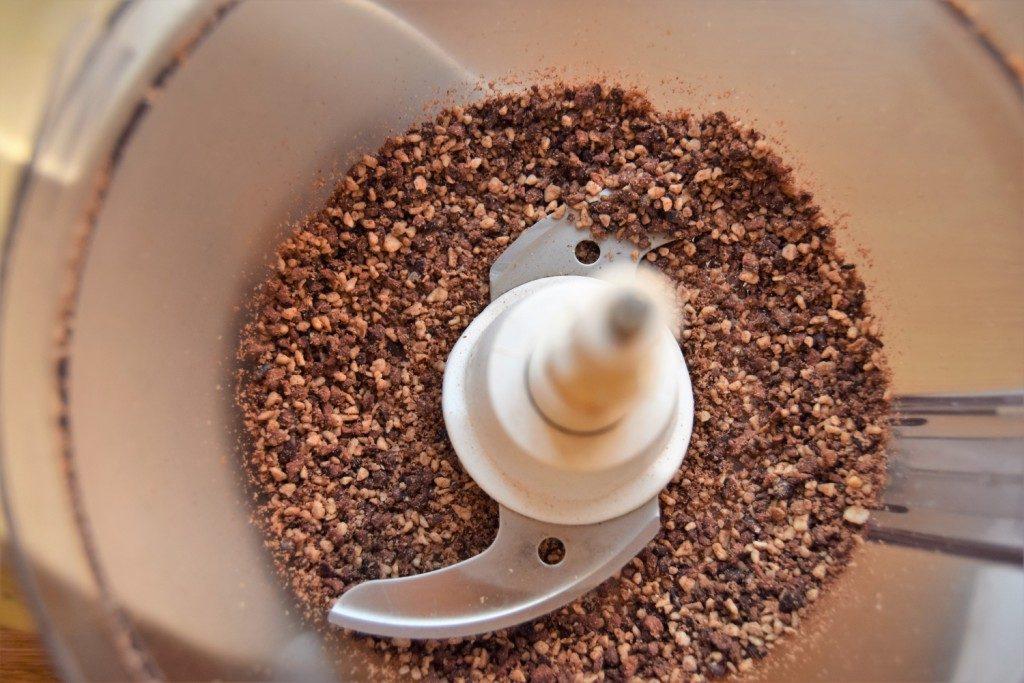 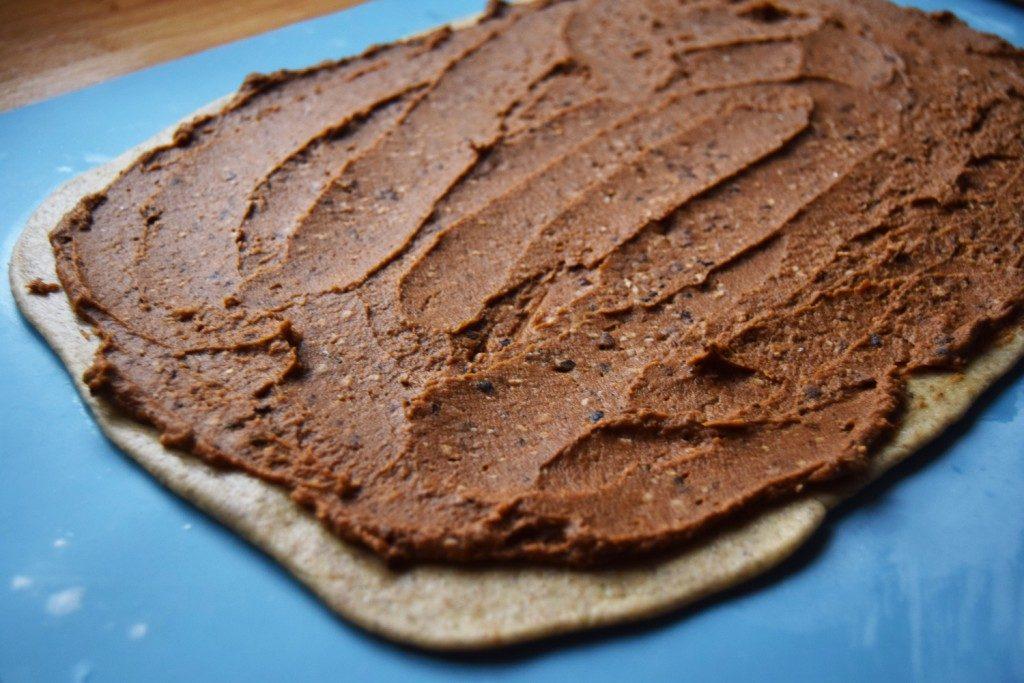 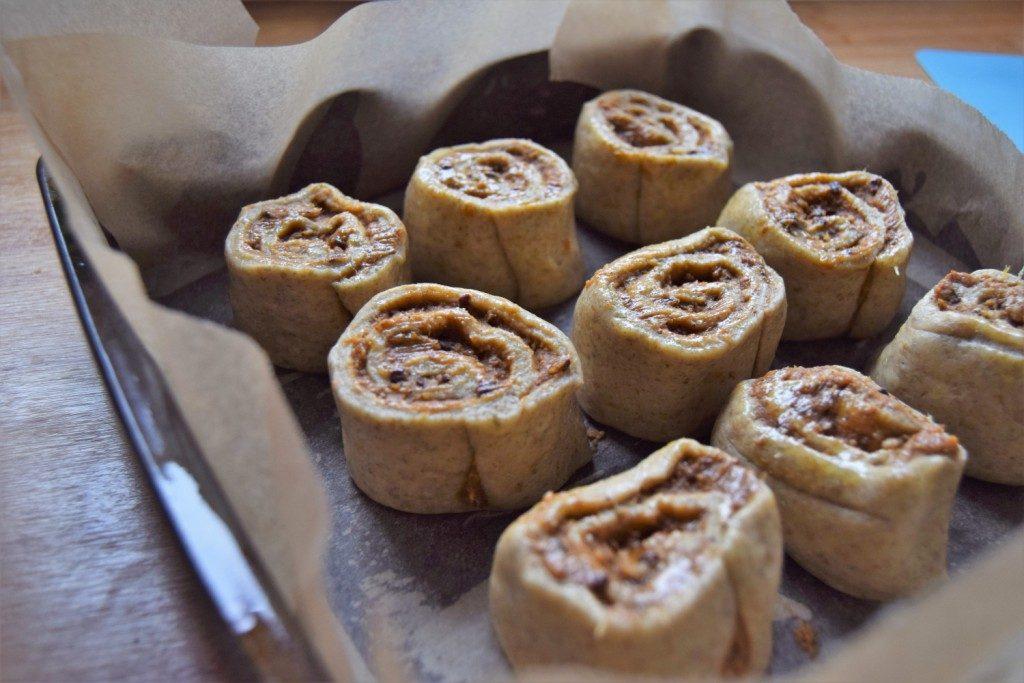 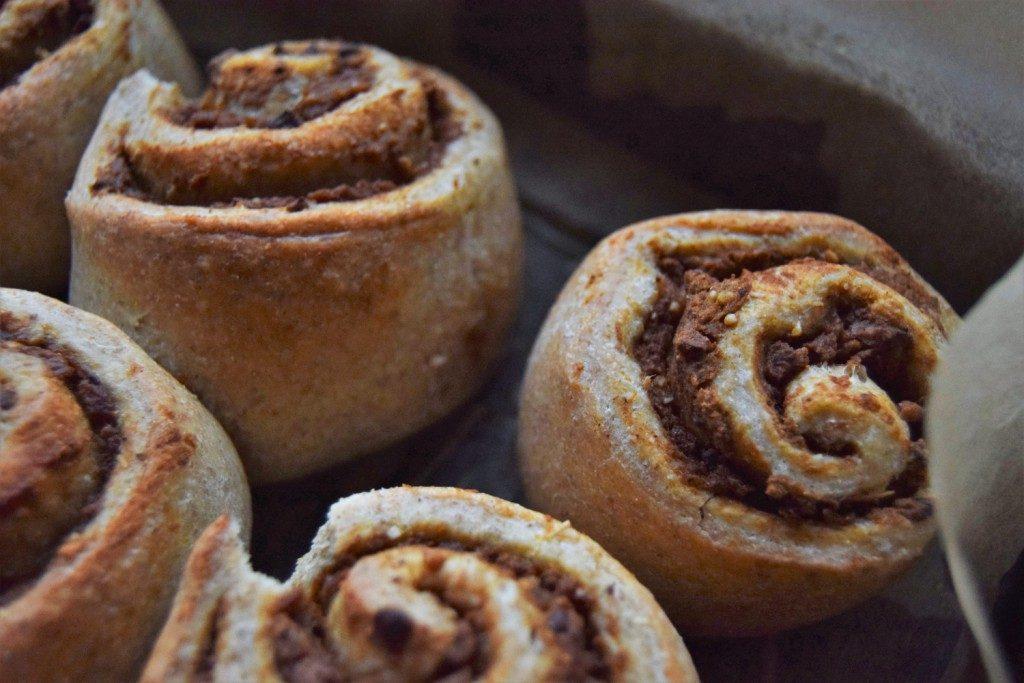 1. Chop the butternut squash into small-ish chunks and place in a steamer basket over simmering water. Cover and steam for around 15 minutes or until soft enough that the end of a sharp knife easily slices in. Once soft, take the squash off the heat, drain the water from the pan and place the squash (in the basket) back over the pan so that it dries out a little.

2. While the squash is cooking, sift together the flours in a large bowl. Add the sugar, yeast and salt, and stir everything together. In a separate small bowl, lightly whisk the egg before adding the milk and olive oil. Whisk again to that it is well combined.

3. Pour the wet mix into the flour, stirring so that a dough forms. You may find it easier to then bring the dough together with your hands. It should be soft and maybe just a little sticky. If it’s too dry add a drizzle of olive oil. Turn the dough out onto a lightly floured smooth surface and knead for about 5-10 minutes or until the dough holds together well and is a little springy. Form it into a ball. Clean your large bowl and place the dough in it, drizzling over a little olive oil and turning the dough so it is covered. Place some cling film loosely over the bowl (I have a clear shower cap that I use for this) and put the bowl somewhere warm. Leave for an hour or so, letting the dough rise.

4. While the dough is rising, it’s time to make your filling. Pop the sunflower seeds and cacao nibs in a food processor and whizz for a few minutes so that they are ground down a little (it’s good to still have a little crunch). Add the squash, maple syrup and cinnamon, and blend again until the squash is nice and smooth.

5. Line a 25cm square baking tin with baking parchment and lightly oil. Once the dough has risen, lightly punch it out with your fingers. Dust your work surface with a little flour, place the dough on it and roll it out into a rectangle approximately 35cm long by 25cm wide. Spread the squash filling out evenly across the dough. Starting from the long end, roll the dough quite tightly (but not so the filling splurts out!) to form a long roll. Cut into 9 pieces and place in the tin, with a little space between each roll to let them spread. Cover again with film and pop somewhere warm for 30 minutes. Preheat your oven to 180°C (160°C fan).

6. Take the cling film off the rolls, brush them with a little olive oil and put in your oven for about 30 minutes. Bake until the rolls are lightly golden on the outside. You may also want to turn the tin in the oven about half through cooking. Once ready, take the tin out of the oven and place on a wire rack for 10 minutes. After this lift the backing parchment from the tin and place the rolls on the rack to cool a little. These are delicious eaten warm with a cup of chai tea!

The rolls will keep wrapped, in a sealed container for a day or two. They also freeze well, but I suggest not separating them before freezing to stop the edges drying out. Just break off as you need them and defrost. You may even want to pop back in the oven for a couple of minutes to eat warm.

– use pumpkin seeds instead of sunflower seeds

Merry Christmas! I hope you have a relaxing and flavour-filled festive season… 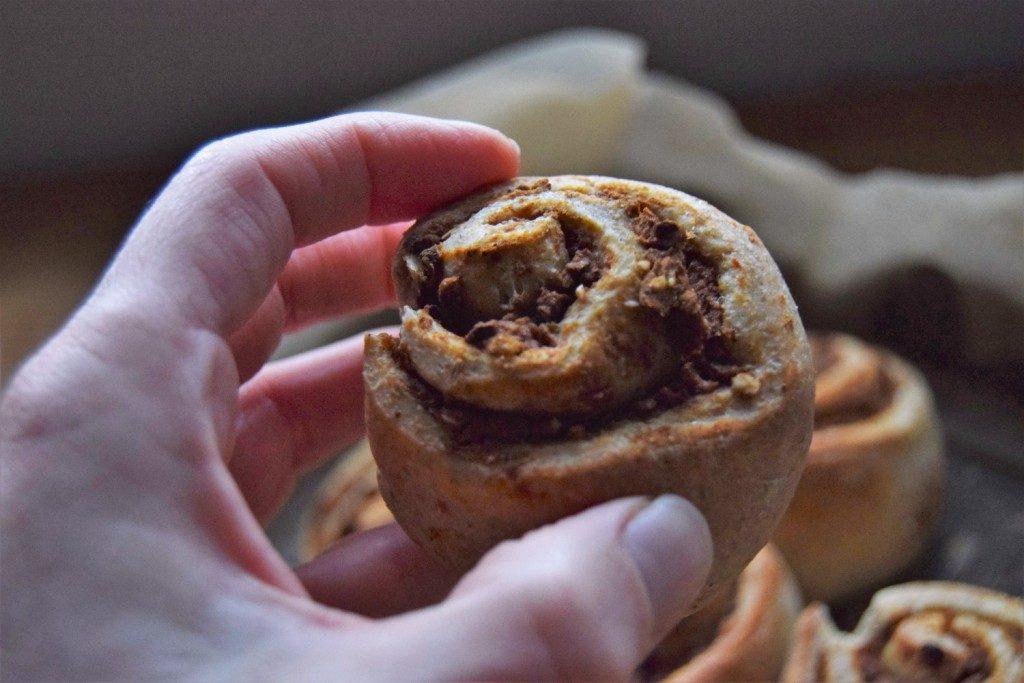