by Food At Heart 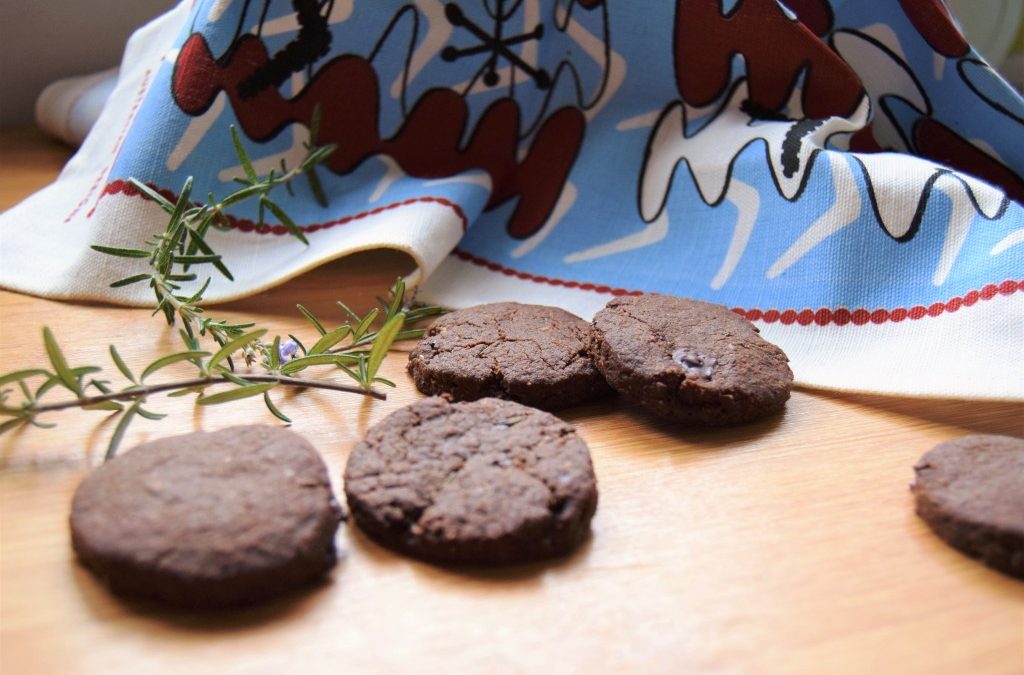 One of the many fantastic things about taking people on chocolate walks (yes there is such a thing!), is that I get to try out really interesting flavour combinations. One of my favourites is a rosemary and olive oil chocolate from William Curley. It’s a soothing and warming blend of flavours that’s particularly comforting on a crisp, cold winter day – though I’m also partial to one in summer too.

As part of my little acts of creativity pledge in 2016, I’ve been experimenting with different flavours in a variety of dishes. I therefore decided to play around with the rosemary and olive oil combo in cookie form. Fortunately I have two big pots of rosemary at my front door as it’s one of the few lants that I manage not to kill. It’s very hardy, needing the occasional bit of watering and not too much else. It’s the perfect plant for people like me who are slightly fair weather gardeners.

I really enjoy making cookies as, like chocolates, you can create a tasty mouthful that gives you a flavour hit and leaves you satisfied without feeling too overindulgent. My husband is also enjoying my cookie experiments as he runs, a lot, so a little extra fuel is always good.

I tend to use coconut sugar as it’s less refined than regular caster sugar and has a nice caramel edge. I also find you need less of it than regular sugar because of the flavour. The molasses also gives the cookies a nice chewiness. For these particular cookies, I’ve used rice flour and ground almonds instead of wheat flour (unfortunately my stomach isn’t a fan of wheat so I tend to avoid it!).

The recipe is also good for anyone who is allergic to dairy as the olive oil completely replaces any butter, plus I’ve used dark choc chips which are dairy free. Just because you can’t have dairy doesn’t mean you should miss out on treats.

While I’ve been playing around trying to get the recipe right (I originally used buckwheat flour instead of ground almonds, but it didn’t taste quite right), I even decided to make some cookie art. I made some little line drawings incorporating cookies which I’ll maybe share at some point, but for now it’s just for a bit of a fun. However if you want to just make and eat cookies, with no cookie art involved, that’s also completely fine. Happy cookie making! 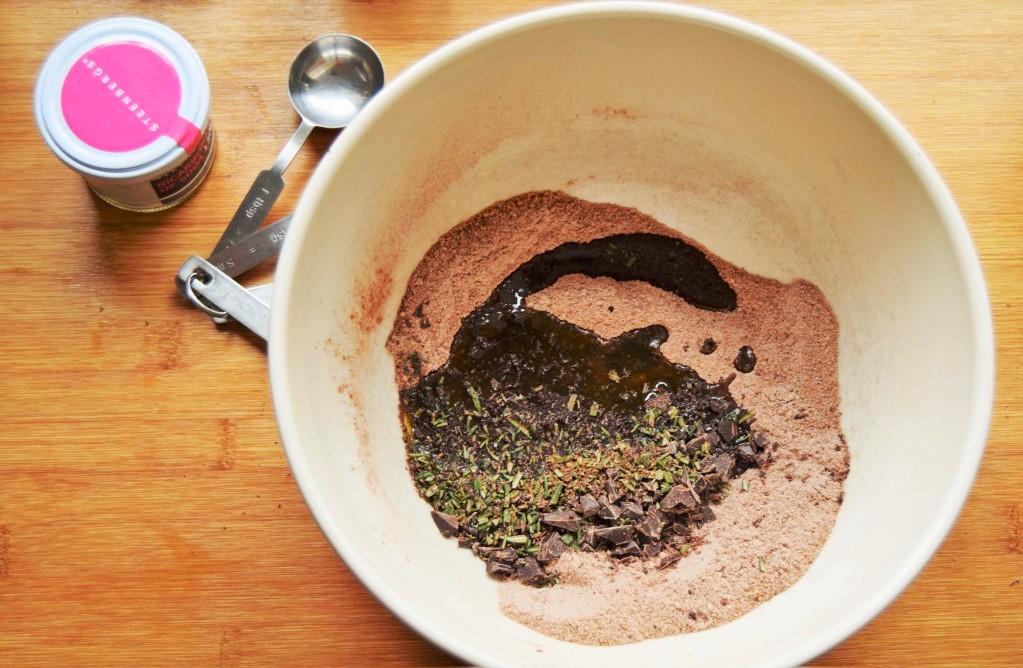 2. Sift together the rice flour, ground almonds, cacao, baking powder and salt in a large mixing bowl. Mix lightly to make sure everything is combined. Stir in the coconut sugar.

3. In a separate bowl, whisk together the egg, olive oil, molasses and vanilla extract until it is completely combined. It should be a fairly thick liquid mix.

3. Pour the liquid mix into the flour and drop in the chopped chocolate and rosemary. Stir it until it comes together and then use your hand to bring the mixture together in a ball. It should be fairly moist and stick together easily; if it doesn’t, drizzle over a touch more olive oil and combine it with the mixture.

4. Wrap the ball in cling film and put it in the fridge for at least 30 minutes. It will make it much easier to roll and the cookies will hold their shape in the oven.

5. Take the ball out of the fridge, take off the cling film and place on a lightly floured surface (use rice flour to keep it gluten free). Gently roll out the ball with a rolling pin so that it’s a few centimetres thick. Cut out circles with a 5cm cookie cutter (or any shape of your choice) and place on the prepared trays. Bring together any cookie off cuts and lightly roll out again to cut out more cookies until all the mixture is used.

The cookies will keep in airtight container for 3-5 days.

Other flavour options:
– try another herb, like oregano (you could even use a dried version)
– swap 25g of chocolate for a handful of cacao nibs
– throw in some chopped up toasted hazelnuts or almonds
– leave out the cacao powder for a less chocolaty cookie (increase the rice flour by 25g to compensate)
– if you cook for an extra 5 minutes you’ll get a crispier cookie

Kick off 2016 with a creative food challenge