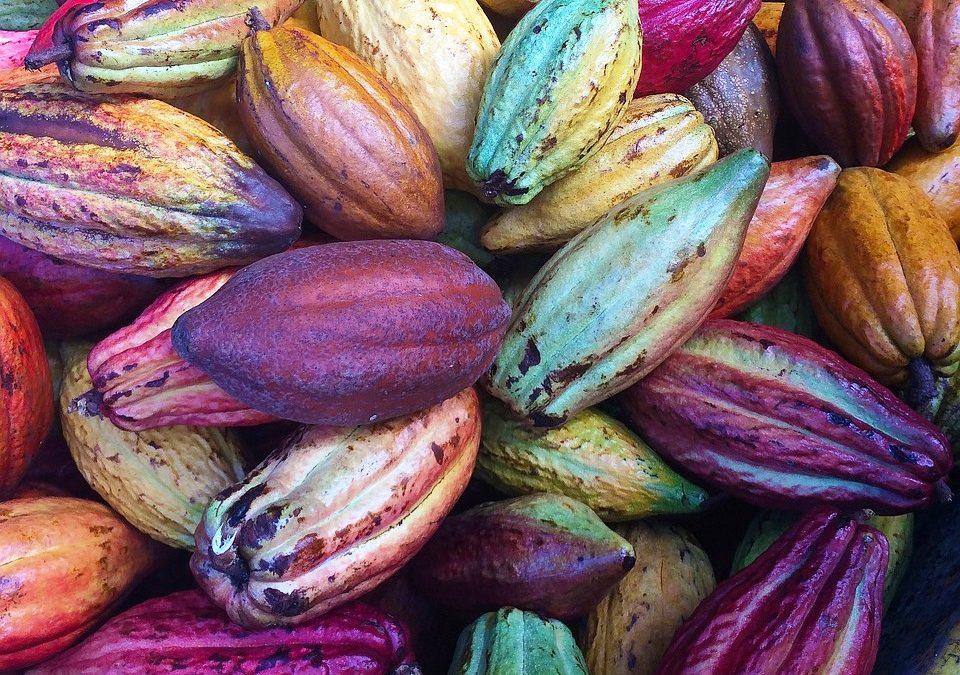 As we head out of (my self-proclaimed) Chocolate October, for my final chocolate post of the month I wanted to celebrate some of the fantastic British bean-to-bar chocolate makers currently gracing our chocolate shelves.

My last couple of articles covered the difference between cacao and cocoa and some tasty ways to incorporate cacao nibs in your cooking. I now want to cover another important chocolate term: bean-to-bar.

Bean-to-bar chocolate makers are a very special breed. They are people who are so committed to chocolate that they make it from scratch. They buy the beans, roast (unless it’s raw of course!) and grind them to make lovely bars of chocolate. And believe me, it’s not a straightforward thing to do.

Chocolate making is a blend of art and science, with a little sprinkle of fairy dust. It’s a matter of trial, error and persistence to create some pretty special chocolate. I’m really in awe of anyone who commits to this level of chocolate love.

Most people making their chocolate from scratch also really care about where their cacao beans come from and the people who produce them. There’s a huge amount of respect involved for the process, from the growing of the cacao plants right through to the final wrapping of the chocolate bar.

One of the things I love about this type of chocolate is that it celebrates the natural flavours of the beans. Bigger companies will standardise the taste of their chocolate so that you always know what you’re getting (which actually also makes sense at time s as many chocolatiers want to work with consistent flavours when creating, for example, their truffles).

In contrast, bean-to-bar chocolate producers glory in the difference of each batch of beans and chocolate. They often won’t add ingredients such as vanilla, to let the personality of the beans shine through. Normally when you look through the list of what’s included, there will only be a handful of ingredients and they should all be ones you can pronounce. In fact, you’ll often just see cacao beans, cocoa butter and sugar (by contrast check out the ingredients for Cadbury’s Dairy Milk and you’ll see the difference).

Now of course this doesn’t mean you have to like every bar; everybody’s palate is different. But it’s a matter of experimenting and seeing what you like, from high cocoa, high quality milk chocolate right the way through to put-hairs-on-your-chest 100% cocoa bars. This is definitely chocolate for savouring, not scoffing. Though given how good some of it is, you could be forgiven for the latter every now and then. 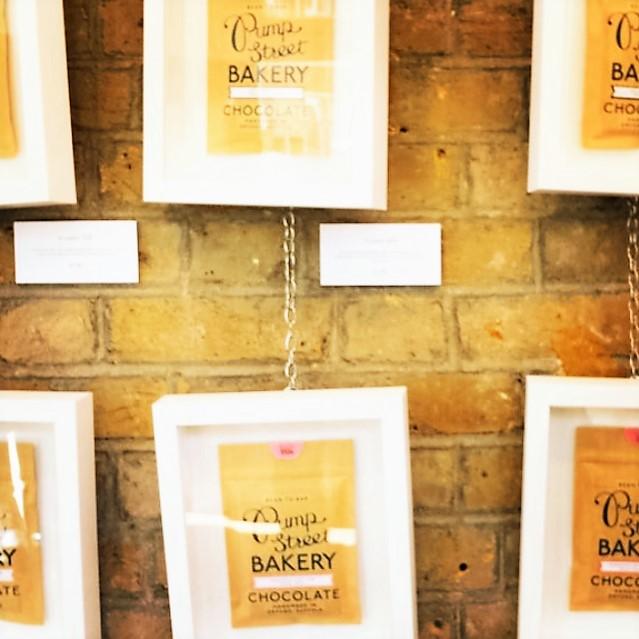 The name is a slight giveaway, but this multi-award winning chocolatier is based in an actual bakery in Suffolk. The bread even finds its way into some of the chocolate.

Pump St Chocolate carefully source their organic beans from owner-operated farms and cooperatives. All Pump St Chocolate’s chocolate is single origin, which means each bar uses a particular type of bean from a specific country rather than blending different types. It gives each bar its own special profile. The chocolate comes in beautifully simple packaging with the specific batch number printed on the top (the taste can change a little from batch to batch, which is part of the fun of bean-to-bar chocolate).

The range is small but perfectly formed, with both dark chocolate and high cocoa percentage milk chocolate. My personal favourite is the Sourdough & Sea Salt 66% Dark Chocolate. There are only a few chocolate bars that I’ll open and find it hard not to eat the whole thing; this is one of them! The newest bars extend the bakery range, with Honduras Bread & Butter 58% (and it really does taste of buttered toast) and, if you’re lucky, you could get hold of a bar of the limited edition Eccles 55%. If hot chocolate is your thing, check out the Single Origin Drinking Chocolate.

Duffy’s Chocolate makes an impressive range of single origin chocolates with beans from around the world. Based up in Lincolnshire, Duffy Sheardown has been creating chocolate since 2008. And Duffy’s go further than Fairtrade when it comes to sourcing their beans; they use the Direct Cacao model. Chocolate makers agree to pay what the farmers asks for their beans without negotiating for beans bought under this model. The money goes directly to the growers without middlemen taking a cut.

This is truly handmade chocolate: each batch of beans is ground in small amounts to bring out their natural flavours. Duffy’s bars mostly celebrate the pure taste of chocolate, all the way up to 100% cocoa. It’s a really interesting experiment to try a few pieces from a selection of bars at the same time. It suddenly becomes very apparently just how different they are. There are a couple of flavoured bar options available too, and the cocoa nibs and oak-smoked salt 43% milk bar is something else! I first heard of Solkiki when my husband shouted out to me one morning while he was watching Sunday Brunch on TV. Cocoa Runners were on the programme talking about Solkiki – and though my husband couldn’t quite remember exactly what the name was, it got me on the lookout for their chocolate. I happened to pop into Dom’s Damson Chocolate shop in Islington not long after and bought my first bar. It was intriguing and, I thought, delicious. (And a small side note: Dom also makes incredible bean-to-bar chocolate.)

It was therefore a delight to meet Iris and Bob of Solkiki at The Chocolate Show this month. They make their organic vegan chocolate using some very rare beans and their ‘off-the-grid’ chocolate workshop in Dorset powers itself on renewable energy. Solkiki go further than single origin beans; Solkiki’s chocolate is single estate, which means each batch of beans is from a particular plot of land. I instantly fell in love with the fruity 68% Marañón dark chocolate, which is full of the taste of raisins and honey. In fact, I fell so in love with it that I bought a few kilos for my chocolate workshops, and have been testing some hot chocolate recipes with it too.

The rope design covering the packaging of Seaforth Chocolate is a little clue to its nautical background. Seaforth’s beans are totally emission free as they are shipped on a sailing boat (the Tres Hombres to be specific) to near the Isle of Wight, where chocolate maker and Seaforth founder, Abe, is based. Abe works directly with farmers and their agents in Grenada and the Dominican Republic, and is another chocolate maker with a single estate approach to sourcing.

If you’re going to give a 100% cocoa chocolate a go, Seaforth Dominican 100% is a good place to start. It’s smooth and intense, and the flavour really develops as it melts in your mouth. However if this is a bit much, the 70% bars are also very good. For something on the sweeter side, there is a 45% Smoked Sea Salt milk chocolate which uses coconut nectar sugar as the sweetener, giving the chocolate a little extra caramelised flavour.

Land is the new kid on the chocolate block, having just officially launched at The Chocolate Show in October. I stumbled across Phil of Land Chocolate’s Instagram account via other chocolate-loving Instagram friends on a day when he had managed to accidentally coat himself in a lot of it.

Phil had a chocolate epiphany while travelling in Guatemala and brought that passion back to London. After landing a job with chocolatier Paul A Young and then Mast Brothers, Phil worked away at his own chocolate at home, using a spice grinder and hairdryer to help him hone his craft. This year Land Chocolate acquired its official home in Bethnal Green.

There are currently 6 bars in the Land range, include 4 dark single origina chocolates and a couple of high cocoa milks. The packaging and the mold used for the chocolate are minimal and stylish; for me it’s the perfect handbag accessory (surely everyone needs an emergency bar of good chocolate in their bag?). My favourite is the Honduras 70%, which I bought a bar of at The Chocolate Show. I’ve been rationing myself so that I don’t eat it up too quickly. The tasting notes on Land’s site suggest that it matches well with whisky, which sounds like the perfect night in during the approaching winter. If you’d like to explore more chocolate, taste with reflection and experiment with some amazing flavour combinations, check out my upcoming Joy Of Chocolate workshops

(I use Pump St Chocolate in all my sessions)

creATE Sessions: why chocolate is a great route to mindfulness

Get some calm in your belly…