The best job in the world? Meet Jennifer Earle of Chocolate Ecstasy Tours 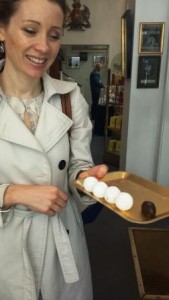 Where did your love of chocolate start?

My mum ate a lot of chocolate while she was pregnant so I’m told; I think I was born addicted. All my family love chocolate and we had it all the time growing up. I was always obsessed with it, and made cookies and had bake sales. We didn’t have any chocolate shops near us, as I lived on a farm in the middle of nowhere. We always had cocoa so I’d make a chocolate cake if I was craving chocolate. As I started travelling I came across lots of chocolate shops. When I came to England I was given chocolate gifts from two of the shops which ended up being on the original Chocolate Ecstasy tour. I’d seen one, La Maison Du Chocolat, but it looked too intimidating to go in. It was like walking into Tiffany’s.

Where did the idea for Chocolate Ecstasy Tours come from?

Well, I wanted to start a business. Because people said to start a business from what you love, I’d already written down the things that I loved: meeting people, London, talking, and chocolate obviously, as well as food in general. Of all the ideas, doing the tours was the one that I thought could start bringing in money quickly and wouldn’t require a huge amount of investment. It took a lot longer than I thought to get things started; this was pre-social media and Facebook hadn’t really reached the UK. After I started the tours I realised it was going to take a while to build, unless I wanted to spend a lot of money doing it. I decided to build it slowly while working in other food roles (including M&S and McDonald’s). I’ve been doing it full time for almost 2 years now.

What chocolate do you always have in your cupboard?

When I started out it was Lindt, which was the best cheapest chocolate and it was so readily available at the time. Any Madagascan chocolate doesn’t last very long in my house because that’s one I keep going back to. It doesn’t have any bitter notes and it’s the more acidic of the chocolates, and I really love acidity. It doesn’t really matter whether it’s Valrhona or Pump St Bakery, Madagascan really goes quite quickly. So does any milk chocolate, because I don’t normally have milk chocolate and it’s so much easier to eat (than dark).

What’s a good way to introduce people to better chocolate?

In the supermarkets the best value chocolate is probably Green and Black’s, where you start to get some of the interesting flavours. Any of the supermarket upper level own label chocolate is usually pretty good. It’s nice to compare the different single origin (own label) ones and you can usually taste the differences between them. I think that’s a good entry to understanding chocolate without investing a lot of money. If you then try own label chocolate against something that’s four times the price, you realise the difference again. Generally on the tours people try something that’s a bit more expensive and they can really notice the difference.

What inspires you most in the chocolate world?

On a purely personal level I get excited by new flavours and seeing new chocolatiers doing different and interesting things. From a broader perspective, it’s anything that gets other people excited about chocolate. It’s great watching people the first time as they try real chocolate and can taste flavours that are not just ‘chocolate’. This is one of the reasons I started doing the tours. I wanted to show people the differences in chocolate and encourage them to try different things, and then hopefully, in a non-judgemental way, get them to think about trying better quality chocolate that’s made in a more sustainable way. I love seeing other people try those chocolates.

You’ve travelled to some amazing chocolate places around the world. What experiences have stood out the most?

The first place I went to was Madagascar. I had an invitation to go with 2 other chocolate loving people for a proper behind the scenes tour. It was amazing as Madagascan chocolate was the chocolate that excited me most at the time – and it still is very exciting to me. The trip included tasting cocoa for the first time; now I can tell the taste from experience, not just what other people have told me. Our visit also made me realise just how much hard work it is to produce chocolate and the physical labour involved. There’s heavy, heavy heat and mosquitoes, and it’s physically such back-breaking work. And most of the workers have never tasted chocolate! It’s not something they can buy in their local town. In Grenada they sell cocoa balls, which is pressed cocoa with sugar and spices and then grated to make a drink. It’s very different from chocolate like we have.

Who do you think is doing exciting things in chocolate in the UK?

The great thing about judging on the Academy of Chocolate and the International Chocolate Awards is that we see products I’ve not seen anything like before, either on the tours or my travels. There are so many chocolatiers starting out and they’re producing unusual flavours, like carrot and saffron inside a truffle. They’re all fun, and if you want people to keep coming back and trying new things it’s worth doing – though some work better than others. The whole bean to bar movement is fabulous. The machines for making chocolate are a lot cheaper than they used to be. You can take the same beans and give them to 3 different manufacturers. They’ll each make a 70 percent cocoa, 30 percent sugar chocolate to the same recipe, and they’ll taste totally different. This is because, for example, they’ll roast slightly differently, and aging also affects things.

What’s involved with being on a chocolate judging panel?

They’re all slightly different and have their own judging forms. We usually look at around 5 chocolates at a time, and it’s either just bars which are all fairly similar, or, for example, all caramels. You’ll check features like appearance, aroma, texture and then give your comments back. The results are all weighted, with most of the weighting being on the taste. At the International Chocolate awards we tested how people’s palates become more or less sensitive by doing a calibration. After 4 or 5 chocolates you can pick up much more flavour, but then after about 12-15 you lose sensitivity.

What are your tips for baking with chocolate?

Use lots! If you’re making a mousse or a tart, the more money you spend on the chocolate the better it will taste because you’re not baking out the flavour. For a small amount melted into a cake, it does get better if you use better chocolate, but it’s probably not worth putting in a £10 bar. I’d use something like Green & Black’s. However if you know you’re going to eat the cake in the next days and people will appreciate it, use a £10 bar to make a ganache to go on the top. I also make cookies and muffins, as when I bake it’s because I fancy eating. I want to eat now, not in an hour and a half when a cake’s finished baking. I use really good quality chocolate, like Original Beans in little buttons used by chocolatier’s and restaurants. I fill banana muffin batter with them and I really do taste the difference, because there are huge chunks of chocolate in there. Often I’ll just break up bars, and if you leave them in big chunks, you’ll get the real chocolate flavour.

At the beginning of the June I’m launching an ice cream tour, which I’m really excited about. It’s going to be in Soho. There are so many great gelaterias, and some use really amazing chocolate. It will be all artisan ice cream, including sorbets, and we’ll also try a chocolate variety in each one. I’m also going to the North West Chocolate Show in Seattle in October. It’s probably the biggest dedicated chocolate show in the US. I’m going to pop to Portland as well and check out some chocolate shops there. I’m taking my husband so I don’t think I’ll go to too many chocolate factories, as it’s supposed to be a holiday as well. He’s very tolerant, but has probably seen more of the inside of chocolate factories than the average person! We try to balance things out with a few trips to breweries.

Take a walk in the sunshine: London Food Walks

A Willy Wonka of a walk: Chocolate Ecstasy Tours