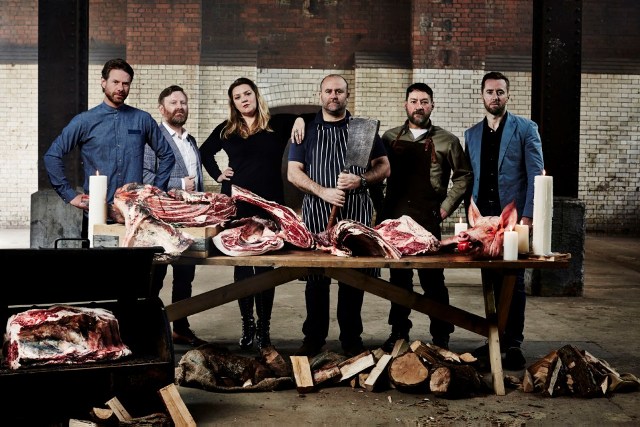 This September Meatopia, the celebration of all things meat, returns to London for its third year. There will be live fire, international chefs, live music and, of course, lots of meat. I caught up with Mat Kemp, part of the team that runs Meatopia in the UK, to find out more about the roots of Meatopia. Mat let me know what to expect from this year’s festival, including some pretty special beef. He also shared his top tips for cooking the perfect steak at home.

How did you get involved with launching Meatopia?

By trade I’m an advertising creative. I worked for a lot of agencies in the nineties, including M&C Saatchi. I then started my own company, Team Pie, doing the creative work I loved most around small, personal ideas and brands. I really like working with people who run their own businesses as it’s really exciting when you build these types of brands.

Through Team Pie I built a brand for James George and Richard H. Turner (who brought Meatopia to the UK), called the East London Steak Company. James already had a successful company supplying good meat to loads of restaurants in London and around the UK. In 2006 there was a bit of a steak revolution, and James, in conjunction with Richard H. Turner, wanted to try and supply really good steaks to the public.

We started by looking at what makes steak good, and James and Richard realised it was about breeds. For a single breed animal, it’s about where it lives, the territory and the food it eats. It’s also about how it’s raised, for how long, and how it’s finished. Nearly all cattle are grass fed in this country and what happens in the last weeks makes a difference; finishing involves feeding cows on barley or brewer’s yeast depending on the breed.

What happened after these investigations into good steak?

James had identified a trend; Hawksmoor had started up, plus James was talking to some of the best chefs in the country who were saying that customers were asking about breeds. James had the network in place, so he wanted to link up with small holdings to supply meat to the public. We’d know the provenance of the animals and would see them before they were ready. We’d bring them down and butcher them, and then sell to the consumer rather than to the trade.

I came up with the East London Steak Company brand. We did all the marketing ourselves on social media; it was quite new then. It was nearly all social media, no PR and no adverts. We did on the ground events and it became quite successful. We were the first butcher who started saying, for example, it’s a Dexter and here’s a Google Maps link to where the farmer came from. We also started doing lamb and chicken, all under the same ethos.

We bought the shop in Clerkenwell, but decided it wasn’t really in East London. We wanted to change the name and start afresh. That’s how we then launched Turner & George.

How did Meatopia develop following the launch of Turner & George?

Meatopia was started in the States by Josh Ozersky, a celebrated James Beard Award winning writer who sadly recently passed away. He was a beautiful writer and could write about a burger in a way that would make grown men cry. The event had been running in the US since 2005 and was originally Josh’s birthday party. It then grew legs!

Richard Turner found Meatopia out in the US and thought it would be a great idea to bring it over to the UK. He also thought maybe it was something that Turner & George could sponsor. Pretty soon we realised it was going to be a bigger thing than we originally thought. We thought the fooderati would like it, but we didn’t realise how much they would like it.

What were the first signs that people were getting more excited about it than you originally thought?

The first signs were on social media. Everyone we spoke to was also really keen to get involved. The first year we had to chase chefs a bit, as no one knew what it was. By year two people were asking to be involved. Meatopia is very well loved as it’s the kind of place chefs want to go on their day off. You also get a lot of food writers there.

It’s very carefully curated. One of the principles of Meatopia is to make sure that there’s a fine spread of meats; it won’t be all beef burgers. We taste all the dishes before the event. We start in January and make sure we like all the dishes and that they’re exciting. It’s not BBQ; it’s about finely designed chef’s dishes cooked over live fire. We get chefs out of the kitchen and on to a couple of Drumbecues. There’s nowhere to hide and it’s about them interacting with customers, not being backstage. Every chef does just one dish.

It’s about the best, well-reared meat, nothing mass produced. And it’s about flavours. We portion size dishes so that they’re all £5, with a minimum of 75 grams of meat and 120 grams in total size.

What should people expect when they go to Meatopia?

People should expect to eat the most amazing food in a relaxed atmosphere. You stay all day and we want you to try as many dishes as you can, which is why we insist that they’re all the size they are. And the quality of the meat is really high, with most of it coming from Turner & George.

We were originally just about British meat, but we’re also introducing Galician beef this year.  These particular cows have done service already, such as having been a dairy cow, and they’ve lived for a long time. They’re taken to Galicia and put out to pasture for as long as the farmer sees fit. They have a great life strolling around the hills eating grass, and local flora and fauna. It’s really sustainable. They’re butchered at between 12 and 15 years old; the average age of a cow in this country is more like 40 to 60 months. The meat has a really nice marble. It’s darker and really relaxed, as it’s had a relaxed life.

We’ll also have goat from a company called Cabrito Goat. They’re all kid goats. Goats are mainly bred in this country for dairy, so generally the kids are got rid of and they go into cat food. James at Cabrito takes the kid goats, puts them out to pasture for another year and feeds them great food. This results in amazing goat meat which is absolutely sustainable.

What are the top things to try at Meatopia this year?

Definitely Galician meat. Also dishes cooked by the international chefs, as they’re only in London for the weekend. We’ve got Uri Navon from Jerusalem, Jock Zonfrillo from Australia, Andre de Luca from Brazil, and JJ Johnson from New York. There will also be butchery classes at Turner & George, with classes focusing on different cuts.

We’ll have at least 4 bars, and we’ll programme a full music schedule. There’s a real carnival feel. We have lots of interesting brass bands, carnival bands and a bit of musical street theatre. We’ll also have DJs, including Tom Findlay from Groove Armada, Trojan Sound System, plus a few other big acts that we’ve yet to announce.

Outside of Meatopia, where would recommend as the best places to eat meat in London?

I recommend Hawksmoor, and Kitty Fisher’s if you can get in. There’s also a place in Hackney called Berber & Q that Richard went to recently and he raved about. Patty & Bun are always good for a burger, and they’ll also be at Meatopia.

What have you learned from your work with Turner & George and Meatopia that you now use at home?

I’ve learned lots about meat. I’ve always loved food and I’ve always loved meat, but the big eye opener for me was realising why I like meat and what makes a good steak.  I now know it’s all about the provenance and the other things I mentioned before.

If I’m cooking at home, I get a dictionary thick steak; there’s no point having a little thin one. Leave it out of the fridge a good hour before cooking to get it to room temperature. It’s best cooked over the BBQ, because of the smoke. The BBQ needs to be really, really hot; smoking hot with white coals.

I always use a rub. At Turner & George we make a classic steak rub of smoked salt, sugars, mustard and various herbs and spices. Make sure the steak is dry by blotting it with kitchen paper, and put plenty of rub on just before you cook it. This will suck out the rest of any excess moisture. Get it on the grill and leave it there for a while. If the flames start turning yellow that’s bad, as the fat’s burning. Otherwise try not to move it too much. Some people never turn steak, but I turn it once it’s got a good char. It’s about getting the outside looking right.

I’ve learned that a meat thermometer is a great thing, especially if the steak is really thick and you need to check if it’s cooked. I always make sure the BBQ has a cool side and a warm side, so if it’s not quite cooked you can move it to the cooler side. From here, bring it up to medium rare, which is what I think all steak should be served as.

If you’re doing your steak on a griddle pan or frying pan at home, it gets really smoky as you want it really hot. I wouldn’t use oil on a non-stick grill pan, but would use a little on a flat pan. What you can do, because it can get really smoky, is get the right char on the outside and then finish the steak in the oven.

The last thing is the resting. Rest the steak in a warm place for 20 to 30 minutes. If you’re doing this in a kitchen, a warm plate on top of your stove is good, but only enough that the plate is kept warm. If the plate is too hot to pick up, the heat is too high. Now, it’s ready to eat.

Discussing the power of zabaglione with Valentina Harris